All About The Slow Cooker 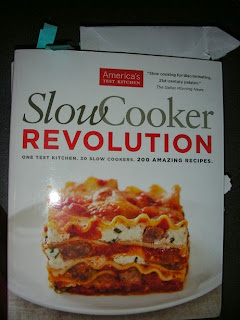 Slow Cooker Revolution from America's Test Kitchen has been great for me.  Usually when I tell the gang dinner is in the slow cooker it is not met with any sort of appreciation.  DH's eyes glaze over and you can feel the sense of dread radiating in waves from him.  One word goes through his brain...mush.  I asked him for a new slow cooker last year I was surprised he bought one for me.  So here is the slow cooker I use: 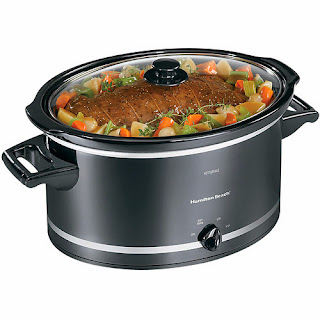 It is a Hamilton Beach 7qt slow cooker (with lid rest).  I needed a larger slow cooker to cook a variety of meals.  I do have to reduce cooking time in using the recipes out of the cookbook, my slow cooker runs hotter.  It all works out because I can keep it on the Keep Warm function if it finishes before we are ready to eat.
If you noticed, I emphasized how Slow Cooker Revolution works for me.  In the reviews a lot of people complained about prep/cook times.  This book works best if you have more time in the morning or the night before to prepare the meal.  Some meats need to brown first in a pan and some vegetables and seasonings need to sweat in a pan also.  Some recipes only have a 4 hour cook time and need a timer used.  I have more time in the morning to devote to prep and less time in the afternoon so this works out perfectly.  This is not your dump and go cookbook.  They do have a Slow Cooker Revolution 2, yes I have it, where prep times are shortened.  I have not tried anything out of the second one yet, but it is also receiving good reviews.  I should have taken pictures as I made things out of the book but I wasn't anticipating it to work as well as it does.  So what have I made?

I few of these I have made more than once and as you can see I have few marked off in the book that are on deck.  Last night I made the Smothered Pork Chops with Onions and Bacon.  When DH called to see what was for dinner and I told him pork chops were in the crock pot you would have thought I shot the cat.  I told him it was a new recipe from "the book" and he calmed down a little.  Now this recipe doesn't call for browning first, so the pork chops didn't look very attractive cooking.  They all loved it.  I have not made chili, stews, soups, sauces, sides, or deserts yet so I have a lot more to try and am looking forward to it.

Just to assure everyone that no domesticated animals were harmed here is a picture of the rotten cat doing what she does best. 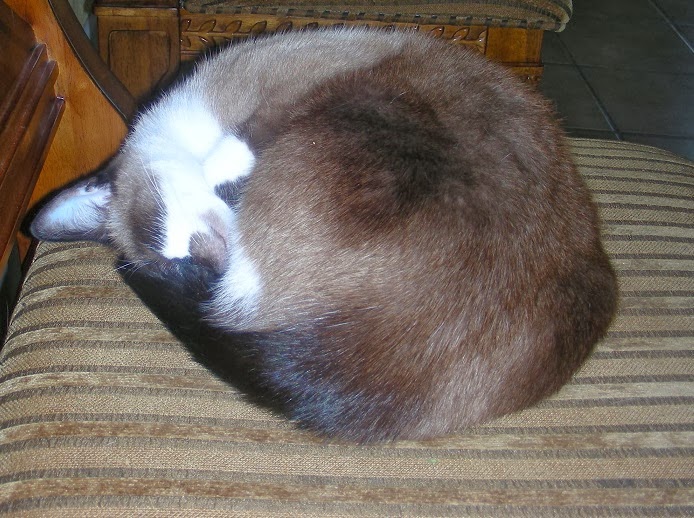 My Finds, Local and Internet 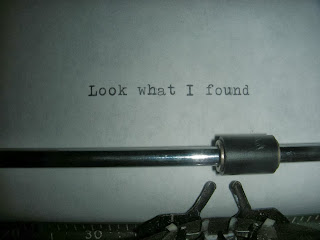 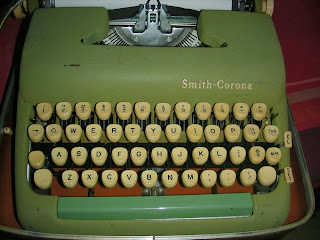 I was excited to find a Smith-Corona Silent, 1950's, on Craig's List.  This is my only purchase using Craig's List, I couldn't pass it up.  It is a little rough looking for things down on the coast since Katrina to find items that haven't flooded.  This machine is beautiful, (can a typewriter be beautiful?), and the only thing needed is a new ribbon.  Early Christmas gift from mom, thanks MOM!

Off to the Salvation Army.  A new one opened in the next town. 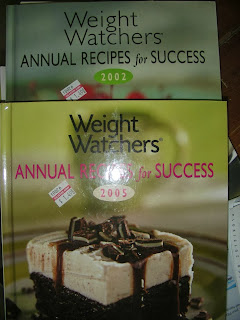 Every year Weight Watchers publishes their yearly annual recipes, they have to be ordered through Weight Watchers and are not available in store.  A woman at my local meeting center has all of them and would go through them and bring in recipes to share.  I picked up 2002 and 2005.  Now on a mission to find more.

Item I have not yet ordered but would like to try out, the Grilliput: 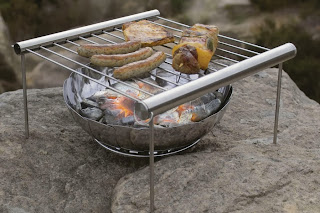 The bottom looks like a large steamer basket, minus holes, and folds like one also.  They have two sizes of fire baskets.  The grill comes apart and is a single tube when it is put away.   Sold separately, each piece weighs less than a pound. I am not affiliated with this company, nor taking part in a promotion.  This looks pretty handy and may make a home here in the near future.    Here is the link for the Grilliput from Industrial Revolution.  ﻿
Posted by Aggie at 7:21 AM 1 comment:

Getting a Little Nippy

It has been a little nippy down here on the coast.  It dips, gets warm, dips again, then it's winter at some point.  Leaves are dropping like crazy, we do not get the beautiful fall colors that neighbors to the north (or more north of us) have.
We survived another homecoming week.  Our house was rolled three nights in a row and the last night someone had drawn male anatomy on the back window of my van.  Thankfully it was washable.  Unfortunately everyone heading out to church Sunday morning got a gander at my back van window as they drove by.  It was my daughter's first homecoming and middle son's second.  Boys are way cheaper than girls.  Everyone made it home safe and a good time was had by all. 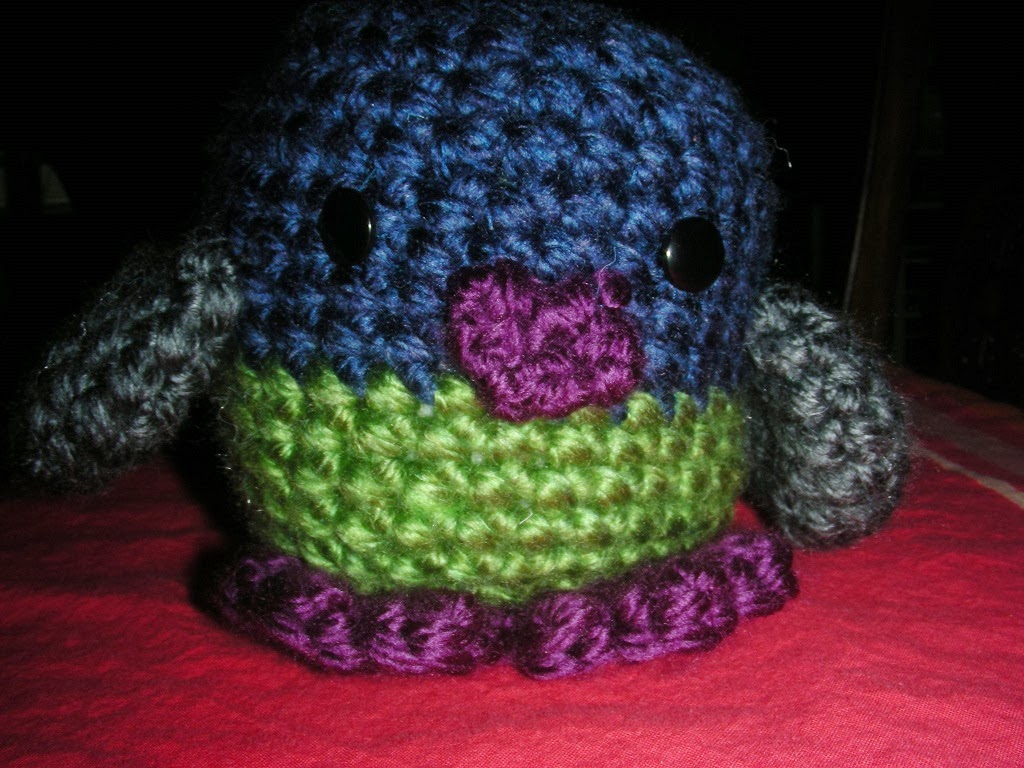 He's a chunky thing, crochet in Lion Brand's Hometown USA yarn which I believe is a 6 in yarn weight so it is super chunky.  After stuffing him I'm sure he could cause injury if thrown hard enough lol.

I was browsing the Internet looking at scarves, I don't know why.  I stumbled across a site for Dr. Who scarves.  It seems that not only is there a cult following for Dr. Who but also a sub-cult if you will, of followers of the scarves worn.  I found the official BBC directions to knit or crochet the scarf, which let me to a group of Dr. Who scarf knitters, and decided to give a Dr. Who style scarf a shot.  I say style because I am not accurate on the colors and am doing a modified version of the scarf which will measure around 9ft instead of 12.....I think.  Knitting is the supreme act of patience for me.  I fly with a crochet hook but as time goes on, I am gaining speed with needles and haven't dropped a stitch yet.  It also helps that it is only knit stitch, here it is so far: 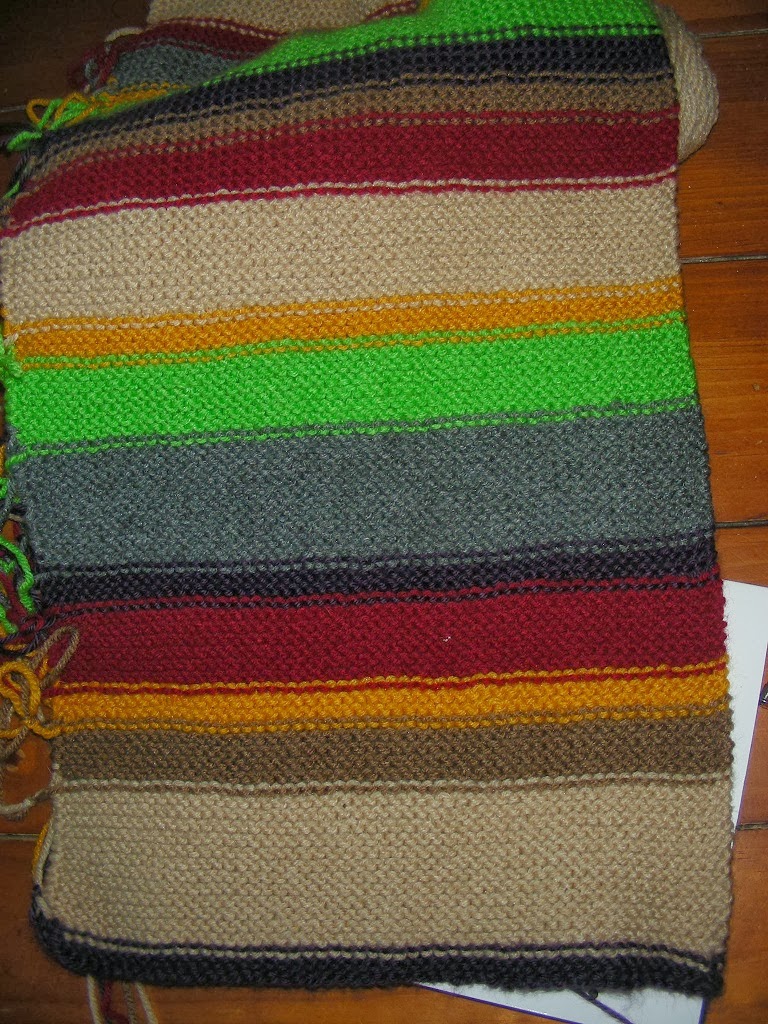 It's about a foot and a half long so far.

The crock pot has been getting a workout also.  I wanted to justify requesting a new crock pot and cookbooks for my birthday last year and one of the cookbooks I like came out with a part 2 and I wanted to cook more from the first one before I dive into the second. I will post more on this soon.