Simplicity 8423 View A.  I made this in a very thin knit material that I probably will not use again.  At least I am putting the new machine to use. 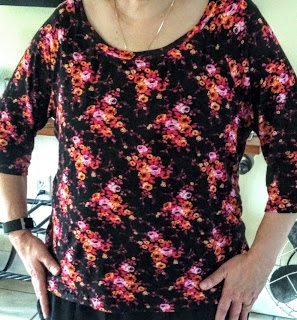 I finally tried out my new Amish Swift.  Gift from my mother from Amazon.  I wound three balls of sock yarn and I tried to use the Nostepinne but I may have to use a thicker yarn to get the hang of it.  A swift sure did make ball winding a lot easier! Time of the Year

This is the time of the year where everyone is anxiously awaiting spring.  I have been struggling with blueberry bushes, do I want to add more and knuckle down?  What plants are going in the garden this year?  I am late with starting seedlings.  Now is also the time to start planning crafted Christmas gifts, I am already taking stock of yarn and various other materials.  I have been saving bits of yarn from socks and hats and have started a large granny square blanket. 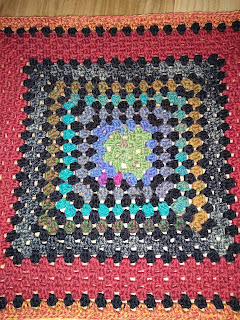 Not large enough yet but it will get there.
We have also been toying with buying land but have decided to put that on the back burner for now.  The only land cheap enough are in flood zones and with a proposed casino in the works our land prices will go up.  Timing is everything.
So it's Monday, and I always love the question about what I did during the weekend.  My answer is usually, I planned the weekly menu, baked two loaves of bread, sewed some clothes and worked with some yarn.  Pretty exciting stuff for the twenty and thirty somethings lol. The flu and sinus infections are running rampant here, please take care.
Posted by Aggie at 7:21 AM No comments:

Needle Biopsy of the Breast

I was debating if I should share here or not.  I had a biopsy done and everything is fine but when I asked other women who have had this done the popular response was it wasn't that bad.  Until you go in to have it done it doesn't feel that way.
Radiologyinfo.org has a thorough explanation on how things work.
After having two mammograms and possible an ultrasound the last thing you want to hear is that you need to have a biopsy.  That means a visit to a surgeon for yet another breast exam and an explanation of what was to occur.  I had a large calcification and plus my age they decided they needed a closer look.  Hopefully you will be able to go in right away.  Because of the holiday season things were backed up which gave me three weeks of having my imagination run away with me.  The person at the radiology department booked my appointment, answered all my questions and made sure I had a direct line to contact her again.  They offer Xanax.  If you choose this option, which I did, you will need a ride home.
I had a great team.  I met with the radiologist right before the procedure, he explained everything again and then the nurse came in with the Xanax.
You will be laying on a table face down, away from everyone, breast in a hole in the table and a machine will compress the breast.  More pressure than your first mammogram, less than the second.  I was a bit worried I would be uncomfortable laying on my stomach for an hour.  The most important thing I can say is relax your body.  The more relaxed you are and the quicker you are in position the less time it takes.  I was done in about 25 minutes.  They are also going to put in a metal marker so they can find the spot easier in the future.  They will numb you on the outside and inside.  There were a couple of times there was pressure and they will hold your back down.  Stay relaxed.  It helps.  I was surprised when they said they were finished.  Like I said earlier, I had a great team in there. You will also have another mammogram right after.
My results were phoned from the surgeon the next day and radiology called me the day after to check on me.  Wear a bra.  They will give you and ice pack when it is done.  They placed steri tape over the wound and a dressing over that.  The dressing comes off that night and I got a waterproof bandage to place over the wound for the next two day so I can shower.  The steri tape came off six days later and the wound underneath was healed.   I took the next day off, was sore, no bruising.  I hope this helps.  I pray for you if you have to go through this that this will be the end of your testing and not the beginning.