I've Been Avoiding You

It was an act of mercy.  With the closing of the government I really did not want to subject anyone with my constant rants about all the numb nuts in Washington.  Sad thing is that until they pass a budget we will have more of the same.

Let us move on to ....... cast iron!  I am ashamed as a cast iron enthusiast that the one thing I have yet to make in a cast iron skillet is a Dutch Baby.  How could I have not made a giant pancake in my 12" skillet?  I did remedy that last weekend or else I would have had to turn in all my cast iron or let it go to rust. 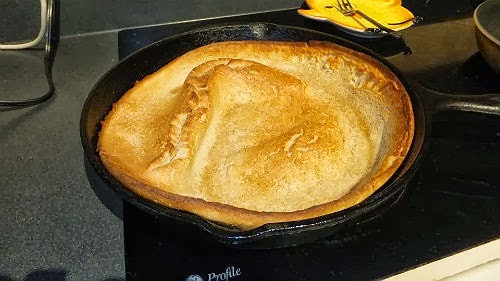 
Preheat oven to 450 F.
Place one tablespoon butter in a 9-12 inch cast iron skillet or 9 inch pie plate. Place in the oven for 5 minutes.
Combine the sugar and cinnamon in a small bowl. Set the bowl aside.
Put the flour, milk, eggs and 1 1/2 tablespoons of remaining cold butter in a blender. Blend until well blended. Scrape down the sides of the blender and blend for about 30 seconds more.
Remove the skillet or pan from the oven and swirl the butter all around. Sprinkle with 1/3 of the cinnamon sugar mixture and then pour the batter into the skillet. Place in the oven at 450 F for 20 minutes. DO NOT OPEN the oven during this first 20 minutes! After 20 minutes turn the oven down to 350 F and bake for another 15-20 minutes until the edges begin to brown.
Remove from oven and let it cool for 3-5 minutes. Brush or drizzle with the melted butter, then cover in more cinnamon sugar. Serve immediately.

The kids loved it and said it reminded them of French toast.

In between political rants and regardless of furlough and shutdowns I brought this home: 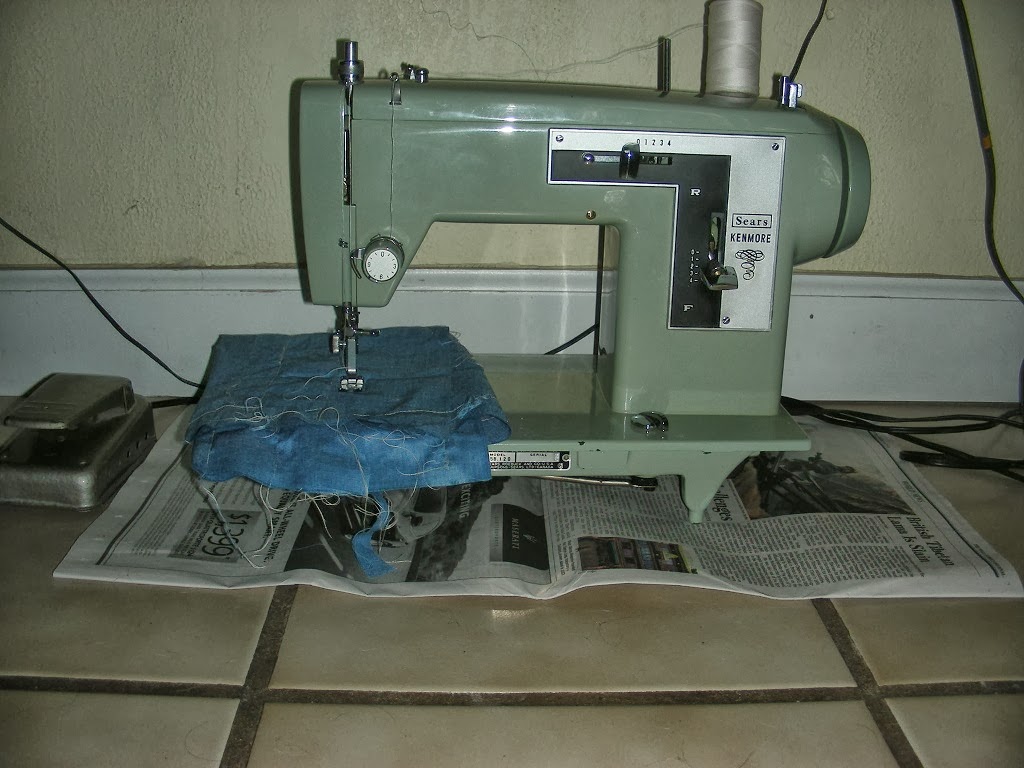 I know, I know, I shouldn't have.  I couldn't help it though, she was $20.  This is an old Kenmore model 158.120 or 12.   It is a basic 1965 straight stitch with reverse.  It was never used and didn't work.  After a good oiling, hence the newspaper, she purrs.  I just couldn't leave her there sitting unappreciated, she is a heavy duty machine but sews nice on thinner material as well.  The woman I bought the machine from said she had a manual typewriter she will look for and to stop by Friday to see if she has it out, yay!

Hurricane Season Validation From the Gulf

Tropical Storm Karen is on the way.  Our forecast shows it could increase to 70mph when it hits here but our actual forecast is calling for 20-40 mph winds.  I think our local weathermen are happy to be forecasting a more serious storm and the local news is probably happy not to be forecasting about day 4 of the furlough.  We have two military bases and a lot of people not working.  I have plants and small projectiles brought in so far.  I am not very worried about the storm, it will be windy and dump about a foot of rain on us, which we could use.  It will give the town a chance to see if all the drainage they installed in our flood prone area pans out.   I am definitely more concerned about being cooped up with 2 teens and 1 preteen.